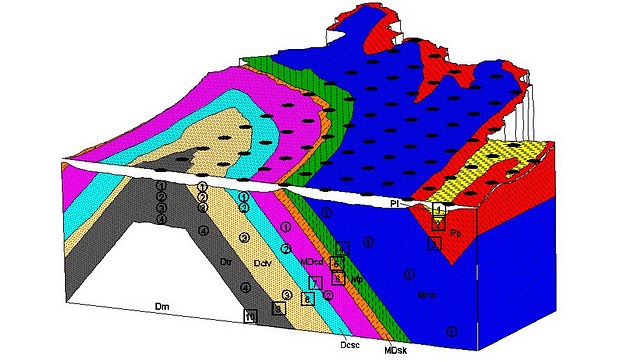 john@geoproven.com
(814) 574-2649
Dr. Hoaglund has spent most of his career researching and applying groundwater models for the management of groundwater resources. That is why you need his expertise to solve your groundwater management problem. He provides the following resources and examples for understanding both the power and limitations of modeling.

Dr. Hoaglund understands the economic limitations to modeling projects,
and the potential for client frustration. He continuously works with
the client to define objectives and manage costs. He provides the
following guidance to his clients:

Why model? Understanding the context of groundwater modeling.

Groundwater modeling is an invaluable tool for the management of groundwater both in terms of understanding past occurrences as well as predicting future occurrences within the groundwater field. The understandings realized and predictions obtained include the effects of multiple pumping wells, the availability of groundwater resources including water and natural chemical compounds, and the fate-and-transport of contaminants, through time.
Groundwater modeling is a synthesis (combining together) of disparate (diverse types of) data. As such, it has a mostly unfair reputation for being expensive, with much of the perceived cost actually being the cost of data acquisition and management. Models need to be calibrated with data. To understand any groundwater problem, even without modeling, the data usually need to be compiled anyway.
Groundwater modeling can range from very simple, inexpensive “back of the envelope” calculations to very complex, arguably expensive analyses that may include simulations on the computer. A groundwater model is a mathematical model constructed with a purpose in mind. Thus the question of its purpose must be answered before beginning to avoid misunderstandings and cost overruns. The mathematics can be simplified, the solution made less expensive, the more assumptions are allowed to be made. The industry phrase for this is KISS: Keep It Simple Stupid.
Groundwater modeling is an exercise in deductive reasoning. It starts with an assumption of truth–namely the physics of groundwater flow and the existing field conditions for that flow–and derives its conclusions mathematically. As the assumptions of truth change, so can the conclusions. Even professionals within the industry will joke about modeling, “What do you want the answer to be?”
That is why groundwater modeling must be conducted by a seasoned professional like Dr. Hoaglund who understands and can defend both the initial assumptions and the limitations of its conclusions. We tend to think deduction is the most powerful form of reasoning. Mathematics entices us to believe its predictions are infallible. After all, we landed the astronauts on the Moon with decimal point precisions using models. But the most powerful form of reasoning scientifically is actually induction, the reasoning of general conclusions from particular facts (i.e. data). And facts overrule models.
On the one hand, it only took one datum to forever disprove Ptolemy’s model of the Earth-centered solar system–a model that held up and was used for over 1,000 years—namely Galileo’s observation of the phases of Venus. On the other hand, to quote Carl Sagan, “extraordinary claims require extraordinary evidence.”The phases of Venus are extraordinary. A single fact not in alignment with a groundwater model may or may not be. A groundwater model will never precisely reproduce all the data, but it can make reasonable conclusions with ordinary data. If extraordinary data are found, we can certainly adjust the model, or perhaps even share in some Nobel Prize money.

A blog and links to the open source code are available at:
http://geosolid3d.blogspot.com

Medium Scale Example ( ~1:16,000 ): Contaminant plume transport from its source to a well.

Video of a groundwater plume transport simulation using Supertranp [Superpositioning transport code], a pumping well / solute transport program written by John Hoaglund. The scenario and the scale is real (a plume about 2 miles long not uncommon), THE LOCATION IS NOT!! For the sake of client confidentiality, the airphoto basemap was “changed to protect the innocent.” A certain speedway was used as the hypothetical release area (3 different releases) with transport for 20 years. The speedway provides a nice scale (oval = 1 mile long). The question posed by the client: Given three known releases, how long will it take for the contamination to reach the well, and could the well be used as a recovery well to prevent further spreading? The plume started arriving 10 years after the first release, and most of the contamination was recovered by the well, though some contamination did spread beyond the well.
The program uses a specified direction and magnitude of the regional groundwater gradient, superposes pumping well solutions, then uses random walk algorithms (from Rand3D by Donald Koch and Thomas Prickett) to simulate contaminant fate-and-transport.

Regional scale models can be used to evaluate water supplies for human use, and to evaluate water budgets of the hydrologic cycle affecting multiple watersheds and large lake ecosystems. As part of the US Geological Survey’s RASA (Regional Aquifer Systems Analysis) program, Dr. Hoaglund completed the model for the Michigan Basin, a simulation of 4 major aquifers throughout the Lower Peninsula of Michigan.

The model calculated groundwater levels in each aquifer, including the water table, groundwater discharge to streams (stream baseflow), and groundwater discharge to three Great Lakes. Documentation of the model and the conclusions drawn from it are discussed in USGS Open File Report 00-504 as well as an article in the journal Ground Water:
Hoaglund, J.R., G.C. Huffmann, and N.G.Grannemann, 2002. Michigan Basin regional ground-water flow, discharge to three Great Lakes. Ground Water v 40, n 4. p. 390-405.
Groundwater recharge (water input to the system) was determined in a separate model relating stream baseflow (the portion of stream flow attributed to groundwater) measurements to watershed climate and surface characteristics data. A summary of that study is provided here:
http://www-personal.umich.edu/~hoaglund/recharge.html
With groundwater discharge going to streams and the Great Lake lateral boundaries of the model, these recharge rates determined the water budget for the model.

The model was calibrated to (i.e. adjusted to match data of) water levels and baseflow stream discharge.

With recharge being determined as a function of the baseflow, the water budget may underestimate the actual water budget by neglecting “underflow,” the groundwater flow that flows beneath and between neighboring basins. A full discussion of this problem is provided in the journal article. Underflow is a component of regional models that is difficult to assess because it cannot be measured directly: it must be determined independently “by proxy” using geochemical tracers and groundwater age data. Direct groundwater flow to the Great Lakes was estimated to be about 7% of the model’s water budget, a value of 1725 cfs, about half of the legally allotted Chicago diversion. For the reasons discussed above, this value is most likely an underestimate of the total direct discharge. Even the underestimated value is a significant component of the overall Great Lakes water budget, critical for the proper management of Great Lake water levels.

Google Maps and Bing Maps (formerly Virtual Earth) have standardized maps and airphotos with set zoom levels, using a Mercator projection for online applications that display continuous maps and/or airphotos. Increasingly, these maps and airphotos are being used as base maps for communicating geographic information to clients across many different professions. The following table summarizes the scale and resolution of these maps. Scale ratios always depend on the size of the display or printed map. A comparison to the scale measured on a 14″ computer screen with 112 dpi is presented.